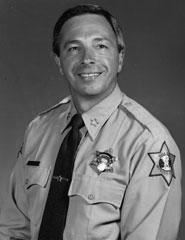 Mark Nicholas Pazin was born on August 19, 1956, to John and Nada Pazin, prominent business owners and children of Yugoslavian immigrants. Pazin attended school in Merced with his sister, Renee, and brothers Richard and Brian, ultimately earning degrees from both Merced College and the University of San Francisco. As a young man, Pazin worked at Mobile Communications, a business owned and operated by his uncle, and part-time at Riggs Ambulance Service as an Emergency Medical Technician.

In August of 1979, Pazin became a reserve deputy sheriff and two years later, was sworn in as a full-time deputy by Sheriff Bill Amis.  In January 1982, he graduated from the Regional Criminal Justice Training Center in Modesto. Pazin married Maria, an academy classmate, in 1982 and the union produced one daughter, Laura. He worked as a patrol deputy and detective on Merced County’s Eastside before being promoted to sergeant in 1989 by Sheriff Jerry Brockman and reassigned to the Los Banos sub-station as a patrol supervisor.

Pazin attended the FBI Academy in 1994 and was subsequently assigned by Sheriff Tom Sawyer to develop and manage a C.R.A.S.H. (Citizens Reaction Against Street Hoodlums) Team.  The philosophy of this unit dictated that Pazin and a small team of deputies use non-traditional strategies in addressing the increasing problems of graffiti, gangs, drugs, and career criminals. Pazin left the C.R.A.S.H. Team and returned to the Los Banos sub-station when he was promoted to commander in 1995.  During this time, he was instrumental in establishing the department’s presence in the North county with the opening of the Sheriff’s North Area Station in Hilmar.  Pazin’s final assignment as a deputy sheriff was commanding the station he helped to establish.

Pazin won the Sheriff/Coroner race in the March 2002 primary election.  He moved back to Merced to assume his new duties, however, his commitment to the North county area did not diminish.  Thanks to a collaborative effort with Superintendent Kirk McCandless of the Delhi Unified School District, a new, high-tech sub-station in Delhi will open in summer 2005.

Pazin would meet his future wife, Lisa, at his brother’s wedding reception.  They were married in 2002 and have one son, Nicholas.

Among Pazin’s most significant contributions, he puts protecting Merced County from convicted sex offenders at the top of the list. During the summer of 2004, Sheriff Pazin successfully fought a very public legal battle against state mental health officials trying to relocate a sexually violent predator from Contra Costa County to rural Merced.  Thanks in large part to the Sheriff’s efforts, a genuinely dangerous sex offender never stepped foot in Merced County.  In fact, a short time later, Pazin took a lead role in the effort to secure legislation (AB493) preventing the transfer of dangerous predators from their county of domicile. Additionally, during his first two years in office, Pazin played an instrumental role in securing legislation consolidating the county’s Sheriff’s and Marshal’s offices (AB2928)