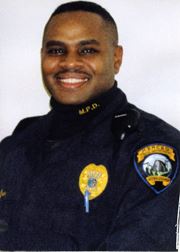 Officer Gray stopped a vehicle in his unmarked car in the 1900 block of Glen Avenue in central Merced at 7:23 p.m. Officer Gray made contact with a male passenger of the vehicle, 21 year old Tahuna "Tao" Rivera, a felon on parole. Witnesses at the scene said they talked for some time, but when Gray attempted to search Rivera he resisted and ran. Officer Gray pursued the suspect on foot when the suspect turned and fired an unknown weapon at Gray, striking him twice, mortally wounding him.

On May 2, 2004, 17 days after the tragic death of Officer Gray, the multi jurisdictional taskforce that had worked day and night to apprehend "Tao" Rivera, was rewarded when he was arrested outside the town of Chowchilla.
Rivera was convicted and sentenced to death.

Officer Gray was born on August 21, 1969, in Tulare CA; to Andrew Gray and Lonather Shaver. He was the brother of Andrew, Tony, and Rosalind. Officer Gray attended local schools in Tulare, until the family relocated to Hanford, where he was a graduate of Hanford High School in 1987 . Officer Gray attended Fresno City College for two years, and entered the Fresno Police Academy; upon completion, he was hired as an officer by the Merced Police Department on March 1, 1997. He was a member of the Merced Police Department for seven years. Officer Gray and his wife Michelle were the parents of Landress, Isaiah and Cameron Gray.