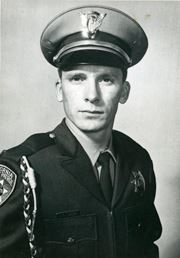 Officer Alfred R. Turner was patrolling on Interstate 5 near Los Banos when he stopped a vehicle at 10 p.m. because the motorist was driving with a headlight out .

Turner was unaware that the car had just been stolen in San Leandro, CA. As Turner stepped out of his patrol car, the motorist exited his vehicle and they began walking towards each other. At that time the motorist suddenly pulled a .357 magnum revolver and opened fire. Turner was hit with three bullets, but returned fire and hit his assailant with five shots. Although critically wounded, Turner managed to return to his patrol car and radio for help. 35 year old Turner succumbed to his wounds 12 days later in a local hospital. Officer Turner was a seven year member of the CHP. His killer recovered from his wounds and was charged with murder.

Officer Turner was born Feb 9, 1940 in Chester, Crawford County, AR., to Charles W.Turner and Pearl L. Poor. The family moved to California and settled in Susanville, Lassen County, May 14, 1944. He was the fourth child born to a family of 6; Charles D. , Darrell W. , Etta M. , Helen, and Iva. Turner attended local schools in Susanville. In Oct 1957 when Officer Turner was 17, he enlisted in the United States Navy; he was to serve until his 21st. birthday. Turner married Judith Noble, a Susanville native; they had two children; Laura and Bryan. Bryan passed away on Oct 4, 1992 in Los Banos, CA

Turner joined the California Highway Patrol in 1968. He was a 7 year veteran of the CHP. Turner transferred to the Los Banos Office in July of 1972, from Hayward.

Officer Turner was laid to rest in the Diamond Crest Cemetery in Susanville,