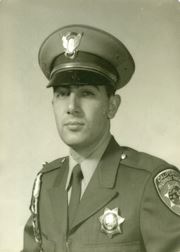 Officers Frago and Roger Gore had been alerted by radio of a vehicle carrying someone who had brandished a weapon. They spotted the car, fell in behind, called for backup, and began the stop procedure. When the subjects' vehicle had come to a halt in the parking lot, the driver was instructed to get out and place his spread hands on the hood. Gore approached him and Frago moved to the passenger side. The right-side door suddenly swung open and the passenger sprung out, firing at Frago, who fell with two shots in his chest. The gunman, later identified as Jack Twinning, then turned and fired once at Gore, who returned fire. In that moment the driver, Bobby Davis, turned and shot Gore twice at close range. Both officers died instantly.

When James Pence and George Alleyn drove in moments later, they could see neither suspects nor downed officers, but immediately came under fire. Pence put out an 11-99 call ("officer needs help") then took cover behind the passenger door. Alleyn grabbed the shotgun, and positioned himself behind the driver-side door. Both officers were mortally wounded in the ensuing exchange, and one subject was hit.

Walter Carroll Frago was a native of Merced, born Dec 22, 1946 to Augustine L. Frago and Rose M. Piovano. He was the third child born in a family of seven; brothers; Thomas, Donald, Patrick, and sister's; Paula, Nanette and Margaret.

Officer Frago was a graduate of Our Lady of Mercy High School, and attended Merced College. In 1965 he married Nicola B. Dunaway, they were the parents of two daughters; Amorette and Gabriell. He joined the California Highway Patrol August 1968.

He was a member of Merced Council Knights of Columbus, U.P.E.C. Lodge, Merced. He was laid to rest in the Calvary Cemetery.