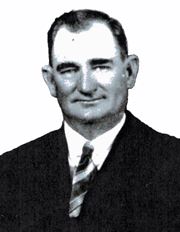 On Nov 1, 1968 Deputy Ross, a Merced County Rehabilitation Center Guard, was killed by James E. Coumpy with an ax behind the Atwater Justice Court where a prisoner crew was working.

A high speed chase began a few minutes later when Coumpy escaped in a county vehicle which was used to haul inmates and tools from the rehabilitation center to the work site. Coumpy was a member of the five man work crew; he recently had been convicted of a burglary charge. The chase led police and sheriff's deputies to 644 R Street, in Merced where Coumpy was subdued while in the process of stabbing his former girlfriend.

Virgil was born Sept 7, 1906 in Treat, Arkansas to Alvin Ross and Belle Park. He was the brother of Raymond, Jesse, Mayme, Mary Sue and Lucille. He married Jesse F. Brixey in OK; they moved to Madera, CA in 1936 and later moved to El Nido where he supervised a cattle ranch. He started working for the Merced County Sheriff's Office about 1965. He and Jessie were the parents of Floyd, Alvie, Jay, Billy and Bobbie.

Virgil was laid to rest in the Masonic section of Merced District Cemetery.