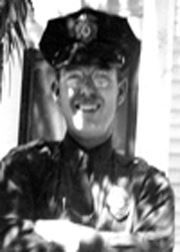 Officer Mackie was shot and killed by William Haggerty on the Aug 14 1949.

The Los Banos Police Department received a call about 1 a.m. Sunday Aug 14 th by a neighbor of William Haggerty. She said Haggerty was on the street near the corner of Third & I streets brandishing a shotgun. When the officers arrived, Officer Mackie went to the front door as the other officer went around to the rear of the home. The suspect confronted Officer Mackie and opened fire with a shotgun, striking him in the face. Officer Mackie fired a round from his pistol at the same time, but the round went through the suspect's hat. The suspect fled the scene but was later shot and killed by other officers.

He married Jeanne Margaret Gretton, at the time of his death his daughter Sherida was two days shy of being one year old, his son Robert was 4 weeks old. His wife Jeanne passed away 24 May 2010.