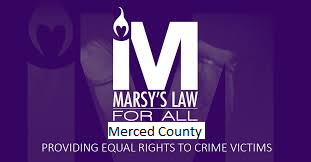 Marsy's Law or Proposition 9, was approved by voters in California in November of 2008 and it became the strongest and most comprehensive Victim's Bill of Rights Law in the United States. Dr. Henry Nicholas, the co-founder of Broadcom Corp., was the key backer and proponent of Marsy's Law. Marsy's Law was named after Dr. Nicholas' sister Marsalee Nicholas,a student at UC Santa Barbara, who was stalked and killed by her ex-boyfriend in 1983.

A week after she was murdered, Dr. Nicholas' and Marsy's mother walked into a grocery store after visiting Marsy's grave, and were confronted by the suspect. They had no idea he had been released on bail and at that point there was no obligation for law enforcement to keep them informed. But with the passage of Marsy's Law, victims of violent crimes must by law be treated with respect and dignity and courts must consider the safety of victims and families when setting bail and release conditions. Family members also have legal standing and the right to be heard in bail hearings, pleas, sentencing, and parole hearings.

The California Constitution, Article 1, Section 28, confers certain rights to victims of crime as they are defined in the law. Those rights include:

1. Fairness and Respect
To be treated with fairness and respect for his or her privacy and dignity, and to be free from intimidation, harassment, and abuse, throughout the criminal or juvenile justice process.


2. Protection from the Defendant

3. Victim Safety Considerations in Setting Bail and Release Conditions
To have the safety of the victim and the victim’s family considered in fixing the amount of bail and release conditions for the defendant.

5. Refusal to be Interviewed by the Defense
To refuse an interview, deposition, or discovery request by the defendant, the defendant’s attorney, or any other person acting on behalf of the defendant, and to set reasonable conditions on the conduct of any such interview to which the victim consents.

6. Conference with the Prosecution and Notice of Pretrial Disposition
To reasonable notice of and to reasonably confer with the prosecuting agency, upon request, regarding, the arrest of the defendant if known by the prosecutor, the charges filed, the determination whether to extradite the defendant, and, upon request, to be notified of and informed before any pretrial disposition of the case.


7. Notice of and Presence at Public Proceedings


8. Appearance at Court Proceedings and Expression of Views


10. Provision of Information to the Probation Department


To provide information to a probation department official conducting a pre-sentence investigation concerning the impact of the offense on the victim and the victim’s family and any sentencing recommendations before the sentencing of the defendant.

11. Receipt of Pre-Sentence Report
To receive, upon request, the pre-sentence report when available to the defendant, except for those portions made confidential by law.


14. The Prompt Return of Property


To the prompt return of property when no longer needed as evidence.

15. Notice of Parole Procedures and Release on Parole

16. Safety of Victim and Public are Factors in Parole Release
To have the safety of the victim, the victim’s family, and the general public considered before any parole or other post-judgment release decision is made.

17. Information About These 16 Rights
To be informed of the rights enumerated in paragraphs (1) through (16).
Victim Services